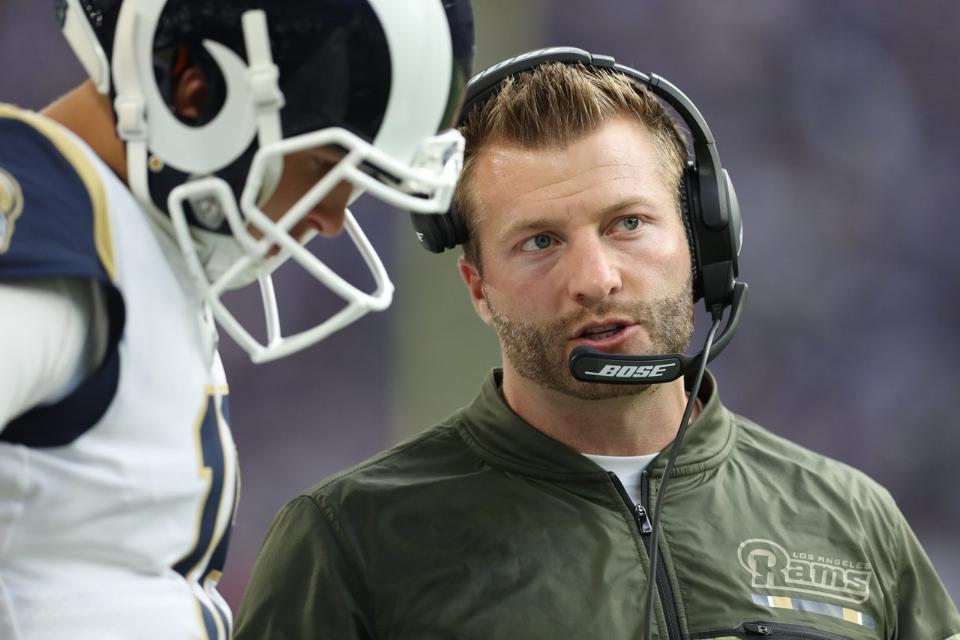 If three weeks ago someone said this game was between two teams separated by one game in the AFC, I would have thought that both the Bills and Chiefs kept winning. Instead, they’ve fallen off, as Buffalo is 0-3 during that span, and Kansas City is 1-2—but 1-4 over their last five. There has been talk that Andy Reid should turn to rookie quarterback Patrick Mahomes, but I think that’s crazy; Alex Smith is one of the best winners in the NFL, and his play is at the bottom of the list when it comes to concerns for the Chiefs. How disastrous would it be if Mahomes wasn’t ready? We saw what fifth-round pick Nathan Peterman did for Buffalo last week when he was thrown into the fire, and now it might impact Tyrod Taylor’s confidence down the stretch. Kansas City needs to stick with Smith, and they should get back on track at home.

The Titans faltered last Thursday night against the Steelers with a chance to prove they’re among the AFC’s elite, but playing in Pittsburgh is no small task. Marcus Mariota and his new wideouts are still working out chemistry issues, and I think the game would be a lot closer in a potential playoff rematch. They need to get there first, though, as a collection of teams—particularly the Chargers and Ravens—are eyeing one of the two wild card spots. The Colts are a good bounce-back spot for the whole team, but the Titans need to come out ready to avoid a road upset. I think they should be prepared on both sides of the ball.

Cincinnati is one of the teams chasing Tennessee, and they should handle business against the winless Browns. Hue Jackson said after last season’s 1-15 finish that they weren’t going to finish 1-15 in 2017 or he would be “swimming in that lake and over there somewhere,” referring to one of the Great Lakes. If he’s to be taken literally, Jackson might not have anything to worry about, as Cleveland seems more likely to finish 0-16 than 1-15. I would hate for that to happen, but I doubt the Browns are able to top a division rival that’s won six-straight meetings by nearly 23 points per game.

Has Atlanta gotten their “swagger” back? According to Julio Jones, they have, and I would agree. Things were a lot closer than they would have liked, but the Falcons were able to hold on and win against the Seahawks in a tough environment on Monday night, so the final wild-card spot in the NFC is currently theirs. Also, they still control their own destiny in the division with two games against New Orleans and one against Carolina yet to be played, and as Jon Gruden pointed out, offensive coordinator Steve Sarkisian is still getting comfortable with the offense, which is basically Matt Ryan’s own system that’s been crafted for a decade. It feels like this could be the week Julio Jones goes off, and while the now-36-year-old Ryan Fitzpatrick is 2-0 for Tampa Bay, but I don’t see him staying unbeaten as a Buccaneer after a trip to Mercedes-Benz Stadium.

Perhaps the 9-1 Eagles have earned everyone’s attention or people are just numb to the Patriots at this point, but Bill Belichick’s team is playing as well as anyone since their 2-2 start. New England has allowed just 12.5 points per game over the past six weeks, and the offense is rounding into unstoppable form with 74 combined points against the Broncos and Raiders—which is scary considering Rob Gronkowski was held in check for both games. This Sunday, I just don’t see where Miami has an advantage, as Stephon Gilmore and Malcolm Butler can cover DeVante Parker and Jarvis Landry, respectively, and the Pats’ front should be able to keep Tom Brady clean.

The only one-loss team in the NFL, Philadelphia rolled through Dallas last Sunday night with 30 unanswered points after trailing 9-7 at the half, and they continue to simply dominate the line of scrimmage both offensively and defensively. Unless Philly is completely overlooking them, I have a hard time seeing how the Bears can pull off an upset away from Soldier Field, especially with star pass-rusher Leonard Floyd out for the year. Jordan Howard needs to completely carry Chicago if they have any chance in Week 12.

Carolina trading Kelvin Benjamin at the trade deadline has been a perfect example of addition by subtraction, and that’s not to say Benjamin isn’t a good player or person, but him being off the field has really opened things up for everyone else. Considering Cam Newton’s MVP season in 2015 came when KB was out for the year with a torn ACL, the fun style of play we saw then and now (before the bye week) is likely here to stay, and that’s bad news for the rest of the NFC. Like the Panthers, New York is coming off a bye week, and that gives Todd Bowles more time to prepare for a clicking offense. As defensive coordinator of the Cardinals in 2013, Bowles’ defense limited Newton to 25 yards on the ground and forced three interceptions, but I don’t think the big quarterback will have too much trouble in this matchup.

The absence of Richard Sherman and Kam Chancellor really hurt the Seahawks on Monday night when Atlanta hung 34 points on them, but there were some positives in the loss. Most importantly, Russell Wilson is healthy and playing MVP-caliber football, and I think most people would agree that he has the ability to outscore teams if needed. Also, cornerback Byron Maxwell looked really good in his team re-debut, so Pete Carroll can rely on a “founder” from the Legion of Boom to be solid on his side of the field. They have to be careful not to sleep on San Francisco, but Seattle should be able to stop Carlos Hyde and make C.J. Beathard beat them.

Easily the best game of the week, Saints-Rams features two of the top quarterbacks and coaching staffs in the NFC. Sean McVay and Jared Goff couldn’t get going in a 24-7 loss in Minnesota last week, but plays were left on the field, including a goal-line fumble and a long drop by Cooper Kupp. The Rams should have a much easier time moving the ball back at home against a Saints defense that will be without both starting corners, and Sammy Watkins could be targeted a bunch with Robert Woods out for Los Angeles. On the other side of the ball, Mark Ingram and Alvin Kamara have yet to see someone stop them, and they should continue to rack up chunk plays. I like this to be a shootout with LA winning late.

If there’s a matchup on Sunday that a current playoff team should be on upset alert for, I think this is it; Jacksonville is going to be without one of their best players in cornerback Jalen Ramsey, and concerns about the quarterback position haven’t been alleviated much despite four wins in a row. [UPDATE: Despite saying he will not play today because of a hand injury, Ramsey will reportedly be in the lineup for Jacksonville.] That said, a running game can usually travel, and Leonard Fournette won’t have to worry about any cold weather this week when they play indoors. Arizona needs to stack the box and make Blake Bortles beat them while trying to control the clock with Adrian Peterson and Larry Fitzgerald moving the chains.

A six-game skid has Denver in what likely amounts to a must-win game in the Bay Area on Sunday, and they’re turning to 2016 first-round pick Paxton Lynch at quarterback in an attempt to jolt the offense—but the entire team should have an edge after GM John Elway’s comments before their loss to Cincinnati. The Hall-of-Fame quarterback essentially called them “soft,” and I think Demaryius Thomas summed it up best when he said, “We’ve lost six in a row, I think there’s a little softness in us somewhere.” Thomas isn’t giving up, though, as evidenced by him sprinting the length of the field after Brock Osweiler threw a pick in the end zone. Even on the road, I think the entire squad will come out determined to get a win against the disappointing Raiders.

Green Bay will have a lot working against them on Sunday night when they hit the road to face a Pittsburgh team that’s rolling after a 40-17 win last Thursday night, but hopefully they’ll be able to give fans a game. To win, I think the Packers need to pull out every trick up in the book on offense and special teams while throwing out different defensive looks at Ben Roethlisberger to force turnovers. JuJu Smith-Schuster being out will make things easier, but a win seems unlikely nonetheless for Green Bay without Aaron Rodgers.

As I said in the beginning of the season, Baltimore might have the league’s best defense, and they were phenomenal in last week’s shutout victory. I don’t see Tom Savage having much success against the opportunistic unit, and depending on how Sunday Night Football goes, fans could unfortunately be in for a couple hard-to-watch games. The Texans have a much better chance than the Packers, though, and if the Ravens struggle offensively and can’t come through at home, there’s a somewhat-realistic scenario where we have an eight-way tie for the sixth seed in the AFC heading into Week 13.