WOLF SPORTS ALERT There may be temporary login issues due to site maintenance. Thank you for your patience!
Home / frontfantasy / Making The Case For The First Pick: Ezekiel Elliott 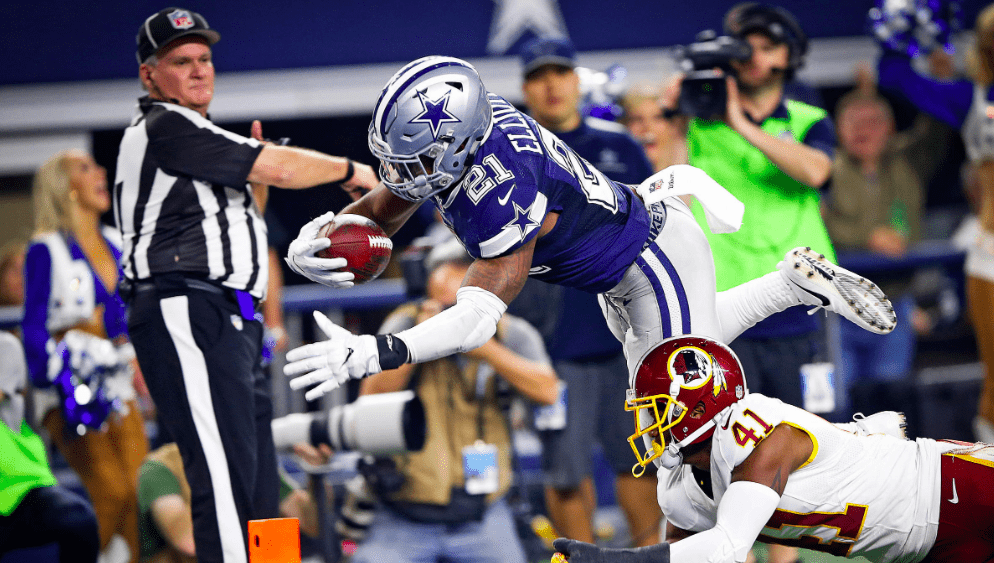 Making The Case For The First Pick: Ezekiel Elliott


If you missed the case for Le’Veon Bell or Antonio Brown as the first pick in fantasy drafts this summer, you can read them by clicking on the links. Now, I make the case for Ezekiel Elliott. [Note: this conversation is for non-PPR leagues (i.e. standard), which is the type of scoring you should be using]

Ezekiel Elliott was well worth a first-round pick in 2016 fantasy football drafts, as he finished his exceptional rookie year as the overall RB2. His 280 fantasy points trailed only David Johnson (313) out of both running backs and all FLEX positions (RB/WR/TE), and including quarterbacks, Elliott was the #7 player in all of fantasy football last season.

There is no reason to believe that Zeke won’t catch more passes in 2017, especially with receiving back Lance Dunbar now on the Rams. If Elliott picks up Dunbar’s work from last season—which is actually being conservative in my opinion—he will see a 50% increase in catches, inevitably leading to more yardage and scoring opportunities.

It’s not like he needs the extra receiving work to be considered for the first overall pick in fantasy drafts, though; Elliott scored double-digit fantasy points in every game last season (he didn’t play Week 17 against the Eagles). After his NFL debut in Week 1, Zeke had at least 80 rushing yards in every game of his rookie year.

The offseason losses of Ronald Leary and Doug Free on the Dallas offensive line can’t be considered a good thing, but they still have the big three of Tyron Smith, Zack Martin, and Travis Frederick, as well as La’el Collins ready to step right in. Besides, the line wasn’t exactly whole throughout the 2016 anyway.

Dallas is sure to use the same kill-the-clock, keep-away strategy that they used last season, and it might be even more effective with the new defensive additions of defensive end Taco Charlton in the first round, and cornerbacks Chidobe Awuzie and Jourdan Lewis in the second and third rounds respectively, not to mention a hopefully-healthy Jaylon Smith at linebacker. Any defensive improvements for the Cowboys will lead to better field position and more time on the field for Zeke and company, which obviously includes quarterback Dak Prescott.

Prescott was sensational as a rookie, throwing for 23 touchdowns and just four interceptions while rushing for another six touchdowns. It will be difficult to replicate the ground scores at the quarterback position. The comparison that immediately came to mind was Donovan McNabb, who rushed for six touchdowns twice in his career and ran for two and three in each year following those seasons.

The greatest rushing quarterback of all time Michael Vick also saw his touchdowns on the ground drop every time he went above five scores:

A regression for Dak in the rushing-touchdown department is a safe bet, which would benefit his teammate and friend Zeke the most.

Let’s just be conservative like we were with the receiving increase and assume Zeke gets half of those Dak scores, so three of them. Also assuming a decrease in carries to 300 in 2017, here is a projected potential season stat line for Elliott:

That would be good for 319 fantasy points, which would have made him the #1 non-quarterback scorer last year, and I made these calculations without considering he missed Week 17 to rest. Using those projections for 16 games, Elliot would have 340 fantasy points.

There are things that could go wrong to hurt Elliott, such as a Prescott regression, the offensive line taking a step back, or the team just not being as good in general, but the second-year back will probably be a top-three pick in almost all fantasy drafts this summer.