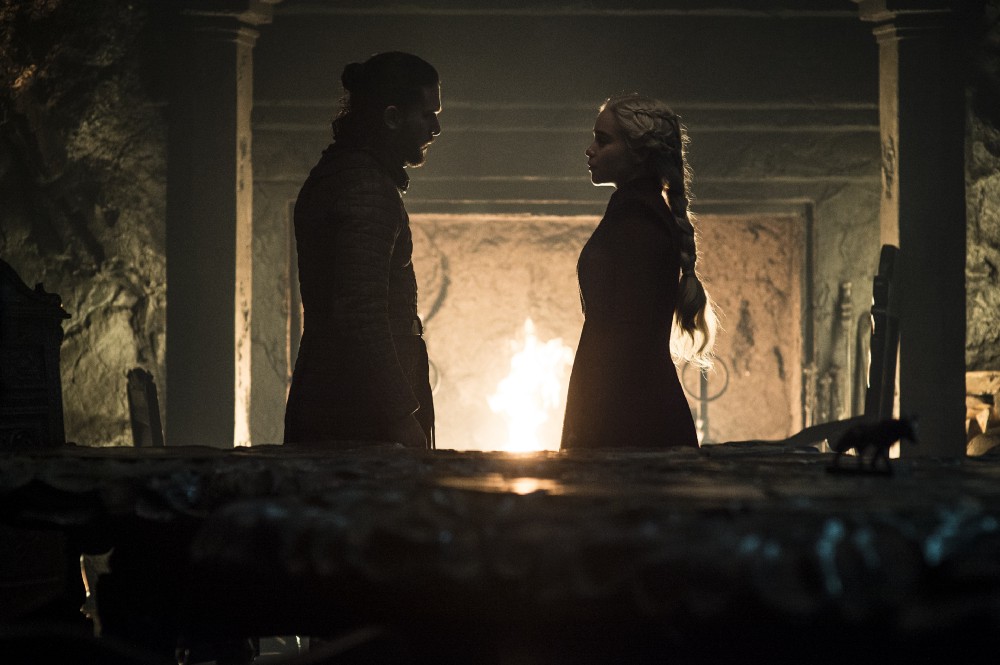 
“When you play the game of thrones you win or you die.” Well Game of Thrones has lived up to those words throughout the series, as many more key characters including Cersei and Jaime Lannister were killed in last week’s penultimate episode, “The Bells”. We know that anything can happen in Westeros, but there appears to be under a dozen serious Iron Throne competitors heading into the final 79 minutes of the series. You can also read our recap for “The Bells”, check out the top musical scores from the show, and look at the final episode photo preview.

Sam has made some good gut calls throughout Game of Thrones—including stabbing a White Walker with dragonglass, curing Jorah Mormont of greyscale, and being uneasy about Daenerys (basically believing the Targaryen queen was a psychopath for killing his father and brother). It’s unclear what is going to happen in the finale, but for Sam to sit on the Irone Throne, probably almost everyone would have to die or Jon would need to fight for the Throne and place Sam on it if he successfully takes it.

With Euron dead, Yara is now the unquestioned leader of the Iron Islands. While Theon told Daenerys that his sister was taking back the Iron Islands in her queen’s name, there’s a chance Yara is caught in the Targaryen’s wrath if a) Daenerys doesn’t like that Yara didn’t help in the Great War or the Last War, or b) Daenerys doesn’t like there being another queen in the Seven Kingdoms, despite their past alliance.

Gendry was given Storm’s End by Daenerys, who didn’t seem threatened by the bastard son of King Robert Baratheon, but things might change after Daenerys snapped. However, Gendry is someone that Ned Stark thought should’ve been on the Iron Throne before the Lannisters, so maybe the current Starks will feel he’d be the best heir other than Jon if they’re somehow able to remove Daenerys.

“The Bells” was set solely down south at Dragonstone and King’s Landing, but Bran might have been watching what was going on while home at Winterfell. Drogon flying over the capital appears to be what he saw in an earlier vision, which might be noteworthy. Despite being the son of Ned Stark, you would think Bran is safe from danger after the point of the Battle of Winterfell was to preserve human history by protecting him from the Night King.

As we head into the final episode of Game of Thrones, Bronn is someone that lingers in the background somewhere. After Daenerys took the Iron Throne, the sellsword might come to collect his debt (High Garden) from Tyrion, but the Queen probably isn’t willing to hand out something that valuable to someone that tried to kill her and Drogon during the Loot Train Attack. Keep in mind that Bronn talked earlier in the season about House Lannister being built up from nothing, so maybe Bronn will continue his ascension into becoming Ruler of the Seven Kingdoms—though as skilled as he is, it’s difficult to see him staying alive for long even if he somehow kills Daenerys.

Obviously, things don’t look great for Tyrion after “The Bells”. Word is almost certainly going to get to Daenerys that her Hand let Jaime go free, and the Queen already warned the clever Lannister about any future mistake being his last. There’s a chance Tyrion is dead if he faces Daenerys, so retreat might be his only option. But maybe Tyrion will be in the mix to sit on the Iron Throne if Jon tells him he’ll seize it for him and let him rule in the south while the North is independent led by Sansa—something Tyrion would agree to (if he’s now OK with getting rid of Daenerys) because of his trust in the Lady of Winterfell.

While Arya had been intent on killing Queen Cersei from the moment Ned was executed at the end of Season 1, the flip switched for the highly-skilled assassin after the Hound asked if she really wanted to be like him all her life. Now, perhaps Arya will accept Gendry’s marriage proposal, which could make for a powerful Stark-Baratheon combination to potentially rule.

Again, Winterfell was not shown during “The Bells”, but Sansa is undoubtedly going to feel she was right about Daenerys after the destruction of King’s Landing. However, despite the Lady of Winterfell being well protected, Sansa’s cold attitude toward Dany could really be an issue now. It’s been made clear that a Targaryen with a dragon can do whatever they want (especially with no more Scorpion weapons), and nothing would be able to stop Daenerys from flying to Winterfell and laying waste to the home of House Stark if she wants.

Ned might have made a mistake by not taking the Throne for himself after Robert’s Rebellion, and it’s possible Jon did the same by continuing to trust in Daenerys. The former King in the North was disgusted by his queen’s actions during the attack on King’s Landing, and it’s difficult to see him wanting to serve her any longer. Much of the northern army participated in the terrible actions in the capital, but maybe Jon could gather enough soldiers to make it one last fight for the Iron Throne. He must know he’d be a good ruler, and he’s been told that by many people; but after all the fighting he’s seen over the years, perhaps Jon has just had enough of it as he did before Sansa convinced him they had to take back Winterfell from the Boltons.

After all the triumphant moments throughout the years, Daenerys finally got what she really wanted: The Iron Throne. However, the event was far from all the positive moments Dany has had in the past, as she laid waste to King’s Landing and its citizens in a major twist that sets her up as a villain in the final episode of Game of Thrones. With Drogon and an army of Unsullied and Dothraki, Daenerys is in an extremely strong position to keep the Iron Throne for good—but remember, she cannot have children (or so she was told by the witch Mirri Maz Dur), which means she cannot start a new Targaryen dynasty if she’s alienated her nephew Jon (a Targaryen that could potentially have heirs) enough.