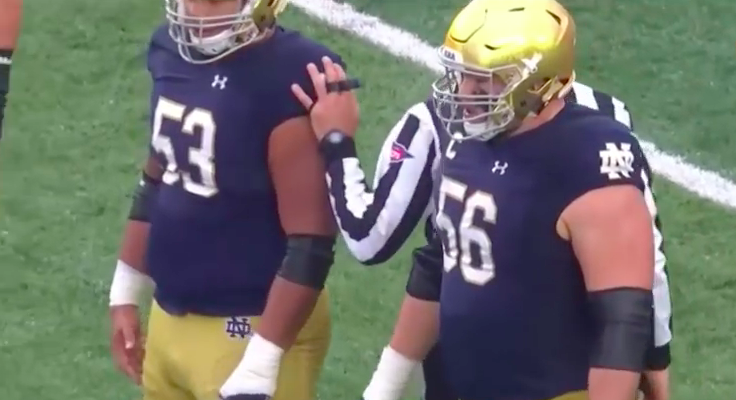 The skill-position players were fairly easy, but offensive linemen are a little tougher to evaluate, so I’ve combined the tackles and guards/centers for this exercise. These prospects are listed in order of my first overall rankings, but I can already tell based on looking at them more that things will change quite a bit leading up to the draft, especially after the Senior Bowl and NFL Scouting Combine.

While some prospects are going to rise and fall, I already know that Quenton Nelson will remain atop the group throughout the entire draft process. Nelson is an absolute bully that punishes defenders at all levels with elite power and field awareness, and he’s almost exactly the same size as All-Pro guard Kelechi Osemele, who can do some of the same things, particularly in the run game.

There aren’t many human beings built like Orlando Brown, but San Francisco’s Trent Brown is one of them. Both players need to sure up their technique, especially against speed rushers, but they each have a high ceiling. I would say Orlando is more of a left tackle if he becomes more technically sound because he started 40-of-40 games there at Oklahoma, but he could become a dominant right tackle in the league.

Mike McGlinchey is an all-around, solid left tackle that might not be as physically-gifted as some of his peers, but he will move people as a run blocker when he gets his hands on the defender, while also holding up as a pass blocker. Duane Brown has been one of the best run blockers on the blindside since entering the league, and he has also been very good in pass protection, and like McGlinchey, he might not be a tremendous athlete, but he’s just a solid player.

This was an easy comp for me, as while he’s not close to as polished as him, Okorafor looks a lot like Tyron Smith. The Western Michigan standout moved to the United States from Nigeria as a teenager, so he still has plenty of room for improvement. He’s also a really good person, so I would love to see him turn into a force like Smith has for Dallas.

Billy Price looks on track to be a first-round pick like Alex Mack was in 2009 for the Browns, and both guys have a very similar game. Price was able to anchor the Ohio State offensive line with great pre-play command and ability in the trenches, and he could instantly stabilize a unit at the next level like Mack has done in Cleveland and Atlanta.

Williams missed much of the 2017 season with a knee injury, but when he’s healthy, he’s a great athlete that can keep the quarterback clean and do damage as a run blocker. It will be interesting to see what his arms measure at, as Ronnie Stanley has really long arms, but I think his power and quickness is very similar to Baltimore’s former first-round pick.

Both Miller and Villanueva are tall, long-armed left tackles that excel in pass protection because unlike other big-bodied players, they are relatively thin. Miller keeps defenders at an arms-length away by using good hand placement, but if they get inside or he simply misses, rushers might be able to get past him, which is what can happen to Villanueva.

I had Wynn listed as a tackle because I thought he might stick where he played at Georgia, but since he already kicked inside for Senior Bowl practices, he will be evaluated as a guard. Originally, my comparison was Charles Leno as an undersized tackle that could still be a very good player, but inside, I liken him to Marshall Yanda because both are great run blockers that could be dominant enough that sticking them outside wouldn’t be a big problem.

Former first-overall pick Eric Fisher didn’t start off his NFL career how many might have expected, but he’s turned into a quality pro player over the past couple years. Brian O’Neill is a little raw as a former college tight end, but he has top-end athleticism that could see him develop into an above-average starter on the blindside.