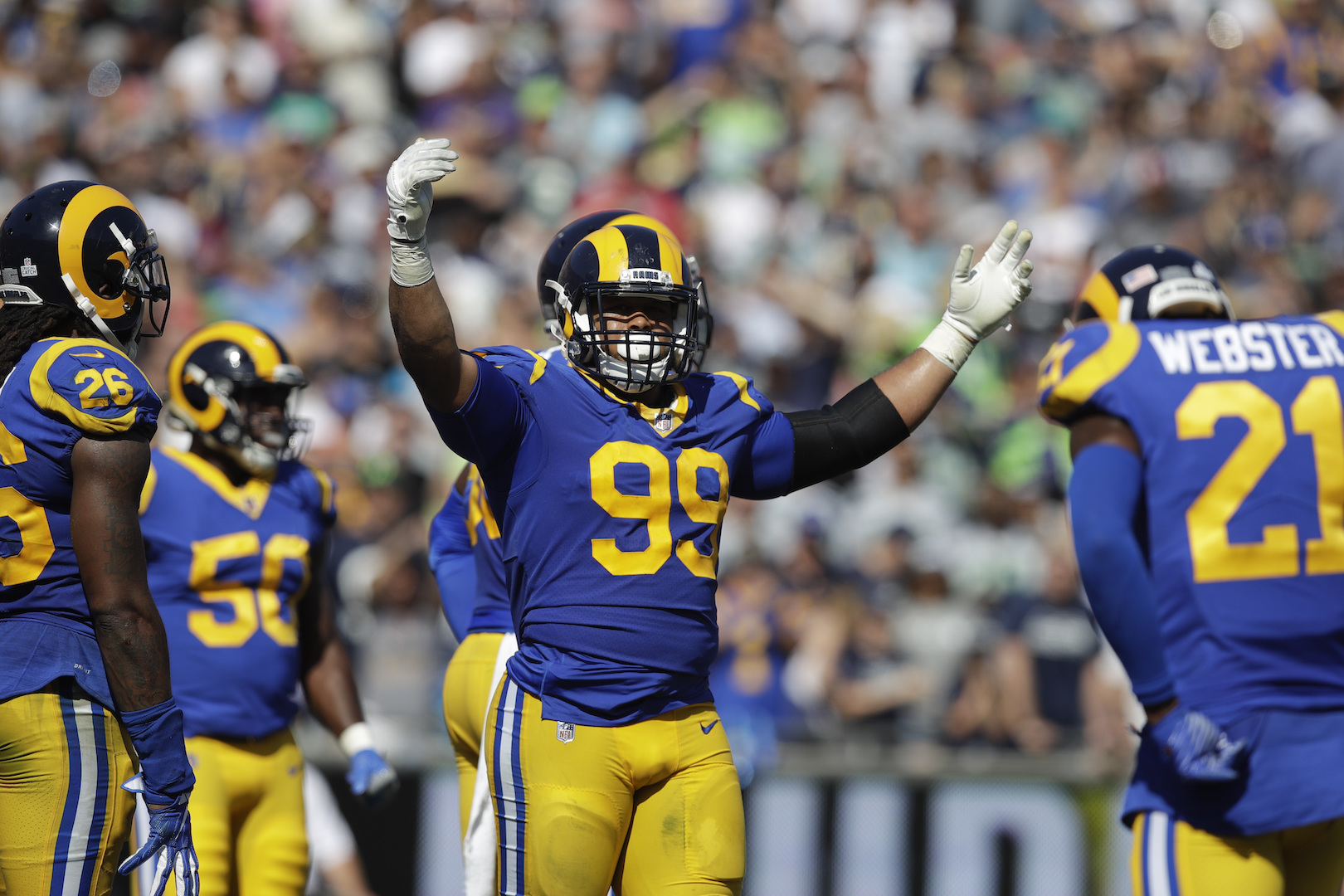 
As the preseason enters the final stretch, our countdown of the top NFL players at each position continues with interior defensive lineman. There are so many great players on the interior defensive line, and different schemes and supporting casts might help other plays shine more than others; as always, this list could vary, and a lot of deserving players were left off. In case you missed it, here are our top players on offense heading into 2018:

With defensive coordinator Vic Fangio and his group remaining in place, the Bears could be a real force on that side of the ball in 2018—and Akiem Hicks will be a big part of it. After time with the Saints and Patriots through his first four NFL seasons, Akiem Hicks really broke out with the Bears in 2016, with his play allowing him to cash in on a four-year, $48 million contract extension last fall. Hicks is a big body at around six-foot-five, 330 pounds, but he gets after the passer as well as he stops the run. Hicks went from 7.0 sacks in 2016 to 8.5 sacks last season, and he’s one of the NFL’s most underrated players.

Cameron Heyward has been one of the league’s best interior defensive linemen for a few years now, but he took another step last season with a career-high 12.0 sacks, earning a First Team All-Pro nod in the process. Heyward bounced back from an injury-riddled 2016 season, and the 29-year-old could continue to get better for one of the AFC’s top teams.

Statistically, Leonard Williams hasn’t come into the league and lit it up; but he’s been a consistent present in the Jets’ front seven through three seasons. There’s a reason the Jets were ecstatic to get Williams, who many believed was the top non-quarterback in the draft, with the sixth pick in 2015. While Williams hasn’t had that weekly gamebreaking impact many have expected quite yet, he’s still only 24 years old and has the right mindset to keep improving and getting better. Also, Williams is a good leader that doesn’t cause any issues in the locker room.

When Ndamukong Suh is on his game, he can still arguably be as unstoppable as any defensive player in the NFL—so it’s a scary thought for other teams now that he and Aaron Donald are on the same squad. Over the years, Suh has sometimes not been quite as consistent as you’d like to see, but he can be a true game-wrecker any given week—particularly as an interior run defender. With a talented supporting cast, Suh could get plenty of opportunities to get after quarterbacks in 2018.

Because the Bengals have declined the past couple of seasons, Geno Atkins has become one of the most underappreciated players in the league. Atkins uses his uncommon athleticism to get to the passer as often as any interior defensive lineman in football, which shows in his three straight seasons with 9.0+ sacks. The two-time All-Pro also uses his quickness to slide past offensive linemen and stuff the run.

The Giants’ Damon Harrison could have easily made the list as a huge defensive anchor, but Linval Joseph—a former Giant himself—does. Joseph has helped Mike Zimmer’s unit ascend to perhaps the best defense in the league, as he uses his exceptional size and strength to make plays in the run game or free things up for his teammates to make plays. Joseph is also impactful as a pass rusher, so he doesn’t need to leave the field on third downs.

Gerald McCoy had a three-year stretch of All-Pro nods from 2012-2014, and he’s continued to play at that level since, despite the lack of team success for the Buccaneers. The additions of Vinny Curry, Jason Pierre-Paul, Beau Allen, and first-round rookie Vita Vea on a revamped defensive line should take pressure of McCoy, who is a load to handle for offensive lineman as someone that can utilize both power and finesse moves with success. McCoy should be in the All-Pro discussion again in 2018.

Some expected Fletcher Cox’s numbers to take a huge jump in Jim Schwartz’s defense. While that hasn’t happened, he’s still been one of the league’s best players and has a Super Bowl ring to show for it. Cox is extremely versatile, with the ability to play at a Pro Bowl level in any scheme. He’s helped the Eagles become one of the NFL’s toughest run defenses for good stretches of the past handful of seasons, and he haunts opposing quarterbacks.

Again, there are so many amazing defensive linemen in the NFL right now, but the top two guys probably stand above the rest. A case can be made for Aaron Donald as the best interior player in the NFL entering 2018, and his ability and production is part of why a long-term deal with the Rams has been difficult to put together. Donald is still just 27, and he’s been one of the NFL’s best from the moment he entered the league in 2014. The holdout isn’t a huge concern after he went through the same thing last season.

J.J. Watt has just 1.5 sacks in eight games the last two seasons as he’s battled serious injuries, but the three-time NFL Defensive Player of the Year has been so good throughout his career that he’s arguably in the discussion of the top defensive players in league history. Watt has had two seasons of 20.5 sacks, including another season of 17.5 sacks. He is relentless stopping the run. If Watt is at full strength, he’s basically unstoppable. People will consider health a question mark until he proves he’s back, but we’re OK with declaring him the best interior defensive lineman entering 2018.