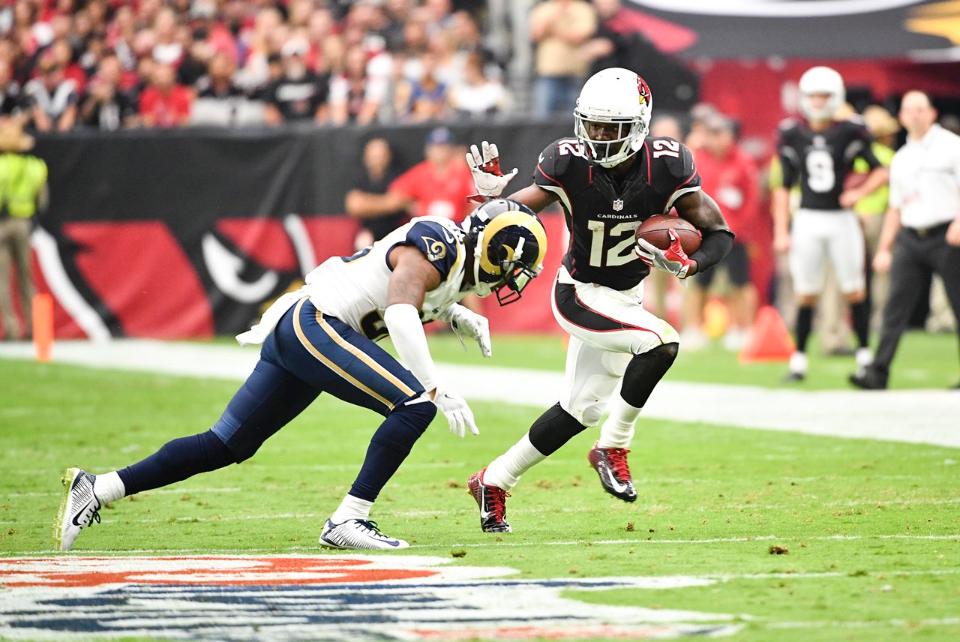 
Dynasty league owners should be paying close attention to the happenings of the NFL through OTAs and training camp, and these are some wide receivers to target to trade in your league. If you missed the quarterbacks or running backs, you can read them, too.

I already wrote how Agholor is poised for a breakout season last week, and whether it is with the Eagles or someone else, the former USC star will eventually be an impact player in the NFL. Because his reputation in Philadelphia has caused his fantasy stock to get way lower than it should be based on his potential, Agholor is the best value on this list.

Most good owners will not be selling Brown this offseason after he was plagued with sickle cell complications in 2016, but if they are, you should absolutely take “Smokey” off their hands. The speedster had a 1,000-yard campaign two years ago, and will be the clear #1 receiver on the perimeter with Michael Floyd gone, and could be the top target in the passing game (besides David Johnson) in 2018 if Larry Fitzgerald retires as some expect.

I will be the first to admit that I was completely wrong about Allen Robinson’s fantasy prospects in 2016, as I had him as a borderline top-five player. That said, the Monstars didn’t suddenly take away his talent after an 80/1,400/14 line in 2015, and interim (and now full-time) head coach Doug Marrone showed in the final two games of last season that Robinson should be the focal-point of the offense with a couple 12-target games for 147 yards and 82 yards. This could be your chance to get a superstar player after a down year.

The Vikings first-round pick from last season averaged 15.0 yards per catch as a rookie… but that was only on one reception. Treadwell was obviously a disappointment for those hoping he would make and immediate impact, but remember, the big-bodied receiver suffered a serious leg injury in his final season at Ole Miss. Now, he is working as a starter at OTAs and drawing rave reviews. Another former SEC star in Alshon Jeffery broke out with 89 catches, 1,421 yards, and seven touchdowns after a quiet rookie season, and Treadwell has the talent to do the same.

We had Watkins as the fifth-best receiver in our 2017 Wide Receiver Rankings (not fantasy rankings), so I am clearly high on him. The Bills didn’t pick up his option for 2018, but they could always franchise tag him after this season. Either way, Watkins could play his way to a boatload of money with a monster 2017 season, and if he can get his healthy long-term, you would have an elite fantasy player for years to come.

Baldwin has been Russell Wilson’s favorite target for the past two seasons, but the Seahawks could turn back into more of a ground-and-pound team with Eddie Lacy and Thomas Rawls in the backfield. Even if they keep airing it out, Paul Richardson will need more targets after he came on strong at the end of last season, plus Jimmy Graham and C.J. Prosise will inevitably take up a decent share of passes, too. I would consider it unlikely that Baldwin ever betters his 94 catches from last year or 14 touchdowns from 2015.

I expect another solid season from Crabtree in 2017, but it could be more of a real-life impact than fantasy impact if Amari Cooper takes the leap that everyone expects him to. Turning 30 in September, Crabtree has revived his career with the Raiders, but he doesn’t have a lot of fantasy upside, so it would be a good move to sell him after an 89-catch, 1,003-yard season.

Landry was somehow ranked as the 42nd best player on the The Top 100 Players of 2017 (airing every Monday night on NFL Network) ahead of guys like Jordy Nelson (14 TD last season, compared to Landry’s 13 career TD), so perhaps you should capitalize on that by telling everyone in your dynasty league that he is available and see if they bite. With the most catches through three seasons in NFL history, Landry is a big asset in PPR leagues, but those who have not given in to the evils of PPR scoring could do better.

In his first season with the Titans, Matthews became Marcus Mariota’s #1 receiver and caught 65 passes for 945 yards and nine touchdowns in a run-heavy offense. Tennessee drafted Corey Davis fifth overall and spent a third-round pick on Taywan Taylor, though, so Matthews could find himself as the third or fourth option in the passing game, which will provide little fantasy value in, as I said, a run-heavy offense.

Well, I have Nelson Agholor as “Buy” and a breakout candidate, so he will have to beat out Torrey Smith for a starting spot opposite Alshon Jeffery this season if that is going to happen. Smith is averaging 17.0 yards per catch for his career, but he has just one season of over 1,000 yards and hasn’t topped 767 yards since 2013. People are talking like Smith is a lock to make be a starter, but I think there is just as much of a chance that he doesn’t even make the team, as the Eagles gave him almost no guaranteed money and would save $4.37 million of Smith’s $4.87 million cap hit by releasing him.