WOLF SPORTS ALERT There may be temporary bugs due to site performance upgrades. Thank you for your patience!
Home / frontfantasy / Overvalued 2017 Fantasy Tight End: Tyler Eifert 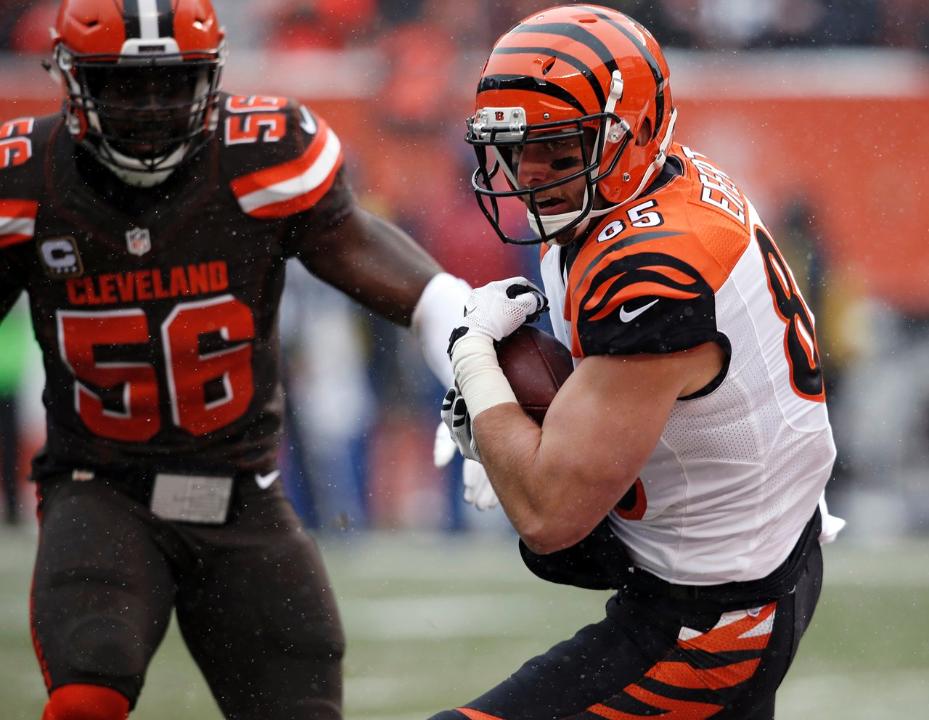 
It’s time for the final article for my 2017 “Undervalued/Overvalued” series, and I finish it off with my overvalued tight end. Below are all the previous ones I have done this summer, but keep in mind, things have changed over the past few weeks (I am no longer low on Russell Wilson or as high on Latavius Murray). All my up-to-date views on players will come in the first week of September when we release our 2017 draft rankings and other content to prepare for your fantasy draft.

Currently going as the TE6 and the middle of the seventh round of fantasy drafts (according to Fantasy Pros), Cincinnati’s Tyler Eifert is my most overvalued tight end for the 2017 season.

Entering his fifth season in the league, Eifert has battled injuries throughout his career, but he has totaled just 1,491 receiving yards in four years. Comparing to another tight end from the 2013 NFL Draft class, Zach Ertz has nearly doubled Eifert’s output with 2,840 yards so far in his career. Still, Ertz is currently going a full three rounds later than the Bengals tight end.

Those high on Eifert point to his 13 touchdowns from 2015 (which is as many as Ertz has in four seasons), but the Notre Dame product has just seven touchdowns combined in 2013, 2014, and 2016. With A.J. Green, Joe Mixon, John Ross, and all the other weapons on offense, is he suddenly going to be healthy and catch double-digit touchdowns after an injury-plagued 2016 season?

Eifert has only surpassed 445 yards just once in his career, and even then, he only had 615 yards, and it came in his breakout 2015 season. Spending a sixth round pick on Eifert is an exorbitant price for a guy that has a worse injury history than Rob Gronkowski and has taken four years to surpass Gronk’s output in one.

Why would anyone spend a sixth-round pick on Eifert when they can get a high-upside running back or wide receiver there? In my opinion, that is true in the seventh, eighth, or ninth round.

The talent both added and subtracted from the Bengals offense this offseason makes it unlikely Eifert will somehow return to his 2015 form. As stated, they now have Joe Mixon and John Ross, both of whom will get their touches (particularly Mixon). Also, Cincinnati lost All-Pro left tackle Andrew Whitworth in free agency.

What’s that all mean? We won’t know for sure until game plans are installed and real games are played, but I think it’s easy to come to a logical assumption. The Bengals will likely need help protecting against pass rushers on both sides of the line with young tackles on each side, and the team didn’t spend a second-round pick on the controversial Joe Mixon to have him help protect the quarterback.

Mixon will be used extensively as weapon out of the backfield, and his production will hurt Eifert the most out of all the receiving options for Cincinnati. Also, Eifert is a very good blocker, so he will be asked to helped more against quality pass rushers than fantasy owners would like.

Eifert lived in the red zone in 2015, but Joe Mixon will hurt him there, too, as he has the makings of an elite back and will take away scoring opportunities because he will find the end zone for himself.

If you think Eifert will have a huge season, then go for it. But he has only done it once in four seasons, and it would be a surprise if he is able to match his touchdown output from 2015. There are dozens of other players I would rather have than Eifert. I might consider him in the 10th round of my draft if falls, but I don’t anticipate having the former first-round pick on my fantasy team in 2017.