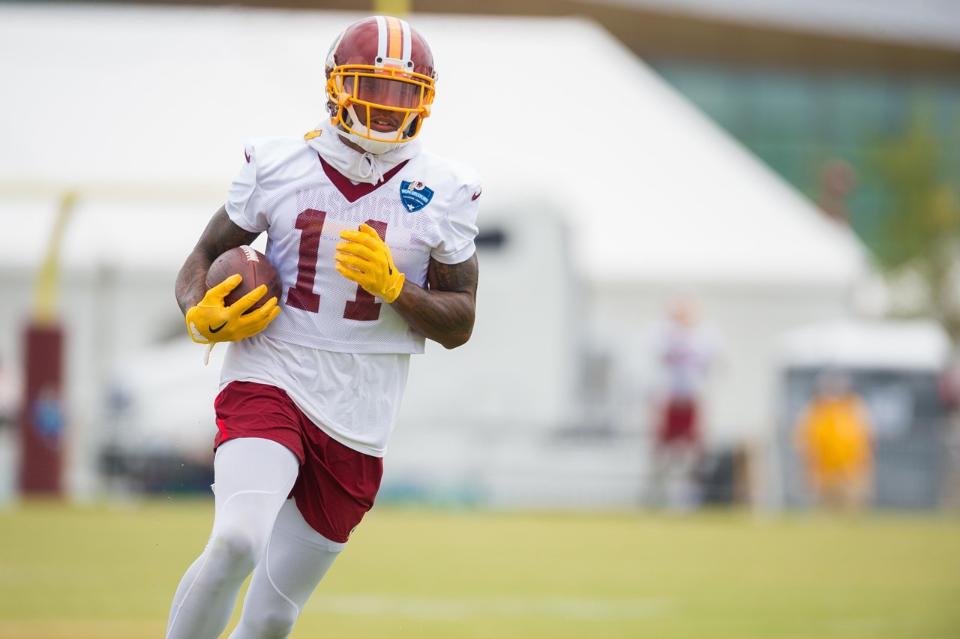 
We are within a month of regular season football! My undervalued/overvalued series continues with the wide receiver position this week after I chose DeVante Parker as my undervalued player last Wednesday. Here are the links to Parker and all the previous players.

I’m not saying one is a better pick than the other (our rankings will be revealed closer to the end of the month), but to compare, DeVante Parker is ranked nearly 65 spots later than Pryor on ESPN. I will say that at their respective draft positions, I would much rather have Parker than Pyror… and it isn’t all that close.

Terrelle Pryor hit free agency after recording a 77/1,007/8 line in his first full season as a wide receiver with the Browns, but the team decided to not re-sign him, instead opting for a multi-year deal with Kenny Britt. It didn’t come cheap either, as Britt will get $32.5 million over four years if he plays out the contract.

Meanwhile, Pryor had to settle for a one-year, $6-million deal with the Redskins. So, the Browns let a guy who went over 1,000 yards in his first year as a wide receiver walk, but signed an eight-year veteran with just a single 1,000-yard season under his belt to a fairly large contract. What should fantasy owners take away from that? Sometimes it’s better to trust how the league values a player over how fantasy football “experts” do.

Including Cleveland, 32 teams had a chance to sign Pyror in the offseason. That included the Patriots (who traded for Brandin Cooks the day after Pyror signed), Eagles (who decided to sign an injury-prone Alshon Jeffery the same day), and 49ers (who like the Browns, need talent, and decided to get 31-year-old Pierre Garcon instead). Basically, the league didn’t seem to value Pryor all that much—certainly not like most of the fantasy world does.

Last year, Pryor was able to accumulate statistics on a one-win team as he was peppered with the 12th-most targets in the NFL. Cleveland was often playing from behind, and the six-foot-four receiver was the only real threat in the passing game after rookie Corey Coleman was injured after Week 2. At the same time, over in Washington, Pierre Garcon led the team in targets, ranking just 32nd in the league.

Kirk Cousins is undoubtedly an upgrade over the quarterbacks Pryor played with last season, but he also spreads the ball around more than they did. While #11 “competed” with Gary Barnidge and and Andrew Hawkins for targets in 2016, Cousins was distributing to Jordan Reed, Garcon, DeSean Jackson, and Jamison Crowder, among others. This year, it will be the same group except for Pryor and 2016 first-round pick Josh Doctson (who essentially redshirted last season) will replace Garcon and Jackson.

Barring unforeseen injuries, it would be a huge surprise if Pryor finished close to the top-12 in targets again, and he could conceivably be as low as the fourth option in the passing game behind Reed, Crowder, and Doctson. Washington has a lot more invested in Doctson than they do Pryor, so if he can stay healthy, Pryor could be pushed to role-player status.

Now, I’m not predicting that to happen (I have Pryor ranked much higher than Doctson), but it’s not out of the realm of possibility. There is quite a bit of risk in Pryor, especially for the draft stock you will need to spend on him. Notable players ranked within ten spots behind Pryor on ESPN leagues include Sammy Watkins, Jordan Reed, Allen Robinson, and Aaron Rodgers.

Wouldn’t your team look a lot better if you let someone else reach for Pryor in the fourth round and you take one of the aforementioned players there? Sammy Watkins and Jordan Reed are elite players who have battled injuries, Allen Robinson is one-year removed from a season of 1,400 yards and 14 touchdowns, and Aaron Rodgers could be the highest-scoring fantasy player in 2017.

Terrelle Pryor barely reached 1,000 yards on a one-win, always-playing-from-behind team with no real competitors for targets. Maybe he can prove me and all the teams that declined to go after him in free agency wrong, but I think if you want value for a Redskins wide receiver, you should get Josh Doctson in the 13th round instead.