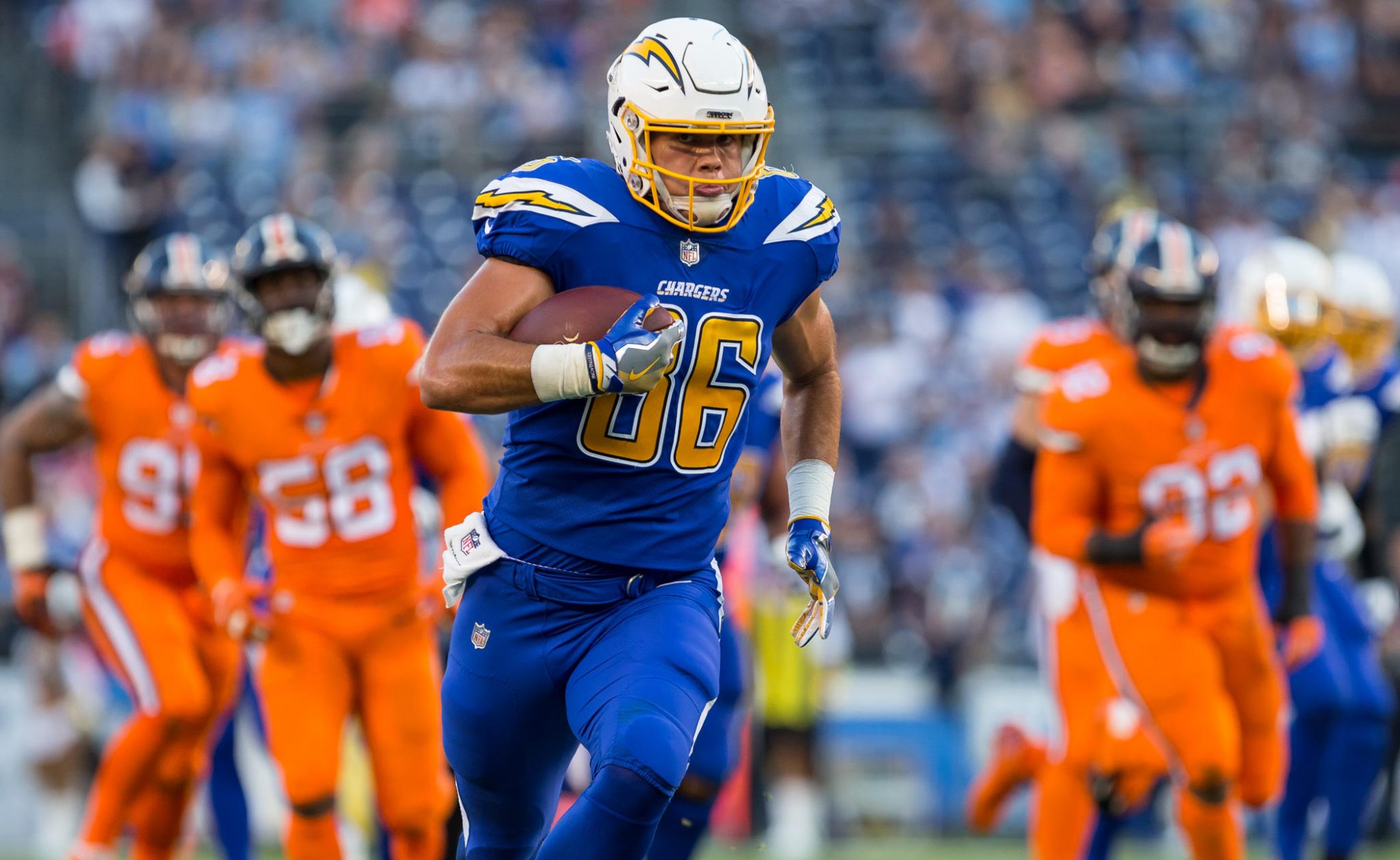 
The final position of my undervalued/overvalued series is tight end. In the beginning of September, I will have a full “Thumbs Up, Thumbs Down” article for 2017 fantasy drafts and every week of the regular season, but here are the links to all the players I have wrote about as being undervalued or overvalued so far.

Chargers tight end Hunter Henry is currently ranked as the 12th best player at his position in Fantasy Pros expert consensus rankings, and his overall ranking places him in the 12th round. He is my most undervalued tight end for the 2017 season.

Playing most of his rookie year as a 21-year-old, Hunter Henry caught eight touchdown passes last season. That number was tied with Tampa Bay’s Cameron Brate for the most by a tight end, and placed him in the top ten in the NFL. And the best part is that he needed just 36 catches to do it.

Many say touchdowns are “fluky,” but that’s simply not true. Has Jordy Nelson lucked into three seasons of 13+ touchdowns? Is Rob Gronkowski having double-digit scores in every healthy season just a fluke? I guess Odell Beckham Jr.’s 35 touchdowns over the past three seasons were just fortunate plays—right place at the right time.

False. Good players score touchdowns, and while there are exceptions, they have logical explanations. Julio Jones has been held to eight or fewer scores in every year but one partly because of health issues, but also because the Falcons simply haven’t made it a point to get him the ball in the red zone. Mike Evans only scored three times in 2015 because he was downed inside-the-five on numerous occasions; he’s got 12 touchdowns in each of his other two seasons. Jimmy Graham only has eight over the past two years because he was traded to Seattle—not because his “luck” ran out (although I guess dynasty league owners could argue that the trade in and of itself was unlucky).

Sure, there will be times when your stud running back gets vultured by a fullback or your superstar receiver had a one-on-one matchup that the quarterback doesn’t exploit at the goal line, but for the most part, touchdowns are scored by really good players. And Hunter Henry looks like a really good player.

The Denver Broncos had no answers for the then-rookie tight end last October, as Henry caught six passes for 83 yards and a touchdown on the way to a Chargers win on Thursday Night Football. The team needed a win after a 1-4 start, and they featured Henry against arguably the best defense in the league and he didn’t disappoint.

Rookie tight ends aren’t supposed to play as well as Henry did in his first year, but a quickly-formed connection with Philip Rivers allowed him to be a real factor, especially in the red zone. San Diego (now LA) was making an effort to get Antonio Gates the touchdown record for a tight end last season, but now that he is just one away from breaking it, they will be able to make Henry even more of a focal point in scoring territory.

Henry scored in four-of-six divisional games last season, and his best two games of the season came against the Broncos (as discussed) and Raiders (three catches, 74 yards, one touchdown), showing that they made it a point of emphasis to give Henry the ball in key games. It’s no coincidence that Antonio Gates was relatively quiet (a combined six catches for 46 yards and one touchdown) in the two games the rookie was featured. When the Chargers needed some wins after a slow start to the season, they turned to Henry.

The 35th overall pick in the 2016 draft is ready to really breakout in 2017. He already performed at a high level as a rookie—and at a position where rookies typically struggle to make an impact. Also, he won’t have the liability of a touchdown-chasing (I don’t mean that as an insult) future Hall of Famer getting as many red zone targets. And, finally healthy, wide receiver Keenen Allen will open things up for the entire offense, and defenses won’t be able to shade coverage towards Henry like they did after his strong start last year.

I will leave you with Rob Gronkowski’s numbers as a rookie compared to Henry’s:

Remember, Henry could have easily had slightly better numbers if Antonio Gates wasn’t chasing history. So, what did Gronk’s numbers look like in his second season?

Now, do I think Henry will do that? No, Gronk is the best tight end of all time. But I do think he will be really, really good—and is an absolute bargain in the 12th round of fantasy drafts.