WOLF SPORTS ALERT There may be temporary login issues due to site maintenance. Thank you for your patience!
Home / frontfantasy / Undervalued 2017 Fantasy WR: DeVante Parker 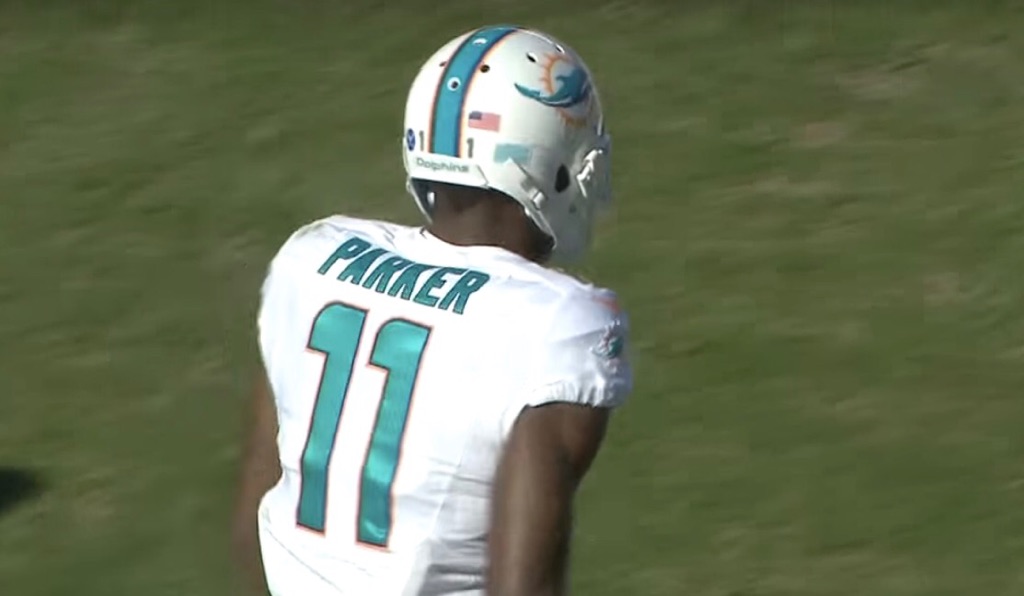 
Four more weeks to go in my undervalued/overvalued series, with just wide receivers and tight ends left. This will carry us to the third week of the preseason, which is about when we will release our rankings and all the tips you need to dominate your draft. As I’ve stated numerous times, fantasy drafts should be held at least after the third preseason games have all been played to limit the risk of injury to whomever you draft. Here are the previous undervalued/overvalued players:

Entering his third year in the league, DeVante Parker is my undervalued wide receiver for 2017. Parker has shown flashes of the ability that made him the 14th overall pick in 2015, but like the rest—besides Amari Cooper—of first-round wideouts from the same class (Kevin White, Nelson Agholor, Breshad Perriman, and Philip Dorsett), he hasn’t lived up to the lofty expectations placed on him coming out of college.

After scoring 33 touchdowns and averaging 17.8 yards per catch at Louisville, Parker drew comparisons to A.J. Green, with a skill-set to stretch the defense, sky for 50/50 balls, and adjust to make difficult catches thanks to a long arms and fluid hips. Now 24, Parker has combined for 82 catches, 1,238 yards, and seven touchdowns through two years—numbers people thought he might be able to reach in one season. There are definite signs to be encouraged by, though.

First of all, Parker’s big-play ability hasn’t gone anywhere. He averaged 19.0 yards per reception as a rookie, but that number dropped to 13.3 last season. There is a schematic reason for that, as a new offensive scheme under Adam Gase had Kenny Stills run most of the deep routes. Parker owners had to be frustrated that Stills (with 14 fewer catches) was on the receiving end of nine touchdowns compared to Parker’s four, but Gase’s overall influence on the offense was a positive.

I kind of figured he would be a great head coach when Peyton Manning vouched for him when the two were in Denver, and Gase certainly proved it in his first year with the Dolphins. Appearing in just one less game than he did in his rookie year, Parker increased his receiving yards by over 50% in the first season with Gase. The touchdowns weren’t there, and he was inconsistent, but Parker still had games of 8/106, 3/51/1, 5/103, 8/79/1, and 4/85/1 in 2016.

The 56/744/4 season line wasn’t all that bad considering he started just eight games (15 appearances). This year, Parker will not only start every game he’s active, but he’ll also become the #1 option in the passing game, and it comes down to three main reasons: health, commitment, and familiarity.

Through two seasons, Parker has battled an assortment of injuries. As a rookie, he fractured his foot in OTAs and it required surgery, causing him to miss the first three preseason games and fall behind. Parker then caught just four passes through the first seven weeks of the regular season to begin his career before injuring his foot again and missing another two weeks. When he finally saw extended playing time upon his return, the then-rookie had at least 63 receiving yards in five of his last six games, and at least 80 in four of them.

Over his foot injuries last year, many people (including me) pegged Parker for a breakout season. Unfortunately, a hamstring injury in training camp put him behind again, and although he just missed the regular season opener and played in the other 15 games, Parker battled minor ailments all year long. He’s been more durable and put up better numbers than some other guys, but the Dolpins need him to be better in 2017.

And that’s where commitment comes into play. Injuries can just be bad luck in many cases, but certain injuries can be prevented or at least become less likely to occur through eating, sleeping, and training habits. Early in the offseason, Adam Gase gave a frank assessment of DeVante Parker, saying that he needs to be “more consistent” and “show up on time,” basically challenging his commitment to being great. Since then, here are just a few of the quotes about Parker, which you can read more about on his fantasy page.

“A great, big year, a gigantic year for us.” – Offensive coordinator Clyde Christensen on his expectations for Parker

“Every day like it’s a game.” – Adam Gase on Parker’s newfound commitment

“Is it me, or is DeVante really fast?” – Adam Gase to quaterback Ryan Tannehill, according to Tannehill

“When I saw him last night, I could tell he was ready to get after it.” – Adam Gase on Parker’s start to training, where he reportedly “[blew] up”

If for some reason the quotes weren’t enough to believe Parker has adjusted his ways, ESPN’s Dan Graziano reported that the receiver made changes to his eating and sleeping habits this offseason, and he will be hydrating better, which will help prevent injuries. So, that’s a check for health and commitment.

Finally, familiarity, which might not matter for Parker in particular, but it does for his quarterback, which will in turn help DeVante put up better numbers. The Joe Philbin era was less than ideal circumstances for Ryan Tannehill to be successful, and he got a big upgrade in Adam Gase last year; again, Gase is one of the best offensive minds in the game.

Tannehill only threw for 230 yards per game last season, but his 93.5 quarterback rating was the best of his career. There were occasional spurts of bad play, but Gase runs a complex system that the former first-round pick should be much more comfortable with now that he has a full season and another offseason under his belt.

The Dolphins have a good collection of skill-position players including 2016-breakout Jay Ajayi, the re-signed Kenny Stills, the traded-for Julius Thomas, plus Jarvis Landry, who is tied for the most receptions through three seaons in NFL history. That said, Parker has the most upside out of anyone in the passing game both as an NFL player and fantasy option in my opinion—and I think Gase feels the same way.

Despite battling injuries and having commitment issues last season, Parker still had 56 catches and a healthy Landry had “only” 94. I say only because while it’s a lot, it was a 16-catch decrease from the previous year under the old coaching staff. With Parker now looking like a different guy, he will easily improve upon the numbers from his second season as the focal point of the passing game.

Gase can also target Parker more in the red zone now that Julius Thomas is around to take some attention away and force the safeties into the seams. Thomas had 12 touchdowns in each year when he was with coordinator-version Gase in Denver, and the tight end’s presence will help Parker more than it will hurt him; Broncos wideout Demaryius Thomas had 11 and 14 touchdowns in the two years together with Thomas and Gase in Denver.

There are plenty of good fantasy wide receivers, but being selected outside the top-40 at the position in standard leagues, Parker is an absolute bargain if you can get him at that price. A healthier and more explosive player, there is no reason Parker can’t reach 1,000 yards and double-digit touchdowns.

[Note: (8/6/17) Miami signed retired quarterback Jay Cutler to replace Ryan Tannehill after he injured his knee last week. If anything, I think that Parker could have slightly higher value with Cutler under center.]