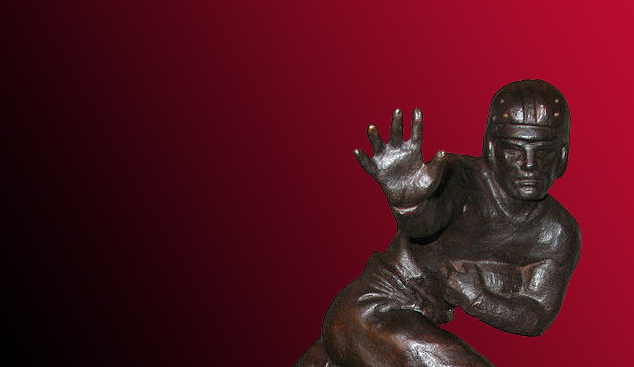 
The run of running backs continues for Day 7 of our 2019 Heisman Trophy candidate countdown.

Despite dealing with injuries last year, Georgia running back D’Andre Swift totaled over 1,300 yards with 13 touchdowns for the Bulldogs last season. He’s without question one of the top Heisman candidates heading into this season.

Swift averaged 7.6 yards per carry as a true freshman behind future NFLers Sony Michel and Nick Chubb in 2017, and he still averaged 6.4 yards per carry last season despite injuries. With Elijah Holyfield now also gone from Georgia’s backfield, Swift could be a 250+ touch player in 2019. Swift’s electric gamebreaking ability paired with Georgia’s top offensive line could lead to a ton of big plays. Swift has shown through two college seasons that he can be a major factor as a receiver out of the backfield, with 9.2 yards per reception on 49 catches. The Bulldogs are fully expected to be in the mix for an SEC championship and College Football Playoff appearance.

Georgia quarterback Jake Fromm might be the top Heisman candidate from the program at a position that has received the most recognition for the award in recent years. Swift doesn’t need many touches to put up massive numbers, but he still simply might not get enough touches compared to other running backs around the nation if the team wants to keep him fresh and healthy for the end of the year.

Georgia must make Swift and their running game the foundation of their offense despite having a great quarterback to sling the ball around, and the Bulldogs must win the SEC.