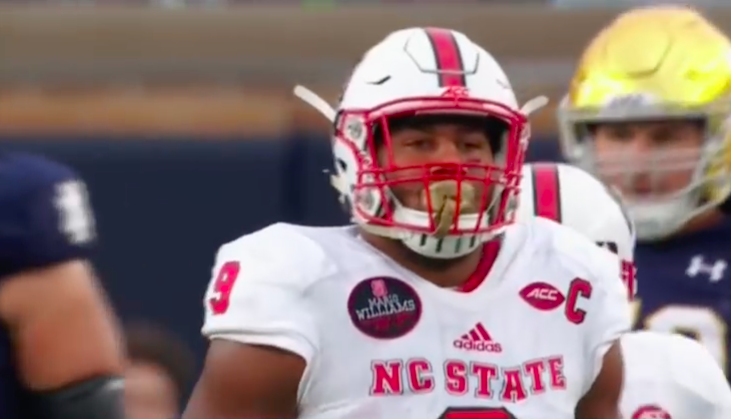 Chubb is clearly atop this year’s class of edge defenders, and he could be a top-five pick in April. The NC State product can either accelerate around an offensive lineman or quickly flash in front of him to get to the quarterback, and he also makes plays in the running game. I think he is similar to Whitney Mercilus, who has turned into an elite defensive player for the Texans, but Chubb is more explosive.

Remember, these comparisons are about play style, not how good I think a player will be, but I definitely see some Von Miller in Okoronwko’s game. While he is “undersized,” Okoronwko is very explosive and knows how to get to the quarterback. He also does a nice job of attacking the football to create turnovers, which is a staple of Miller’s game.

I don’t use off-field issues as a factor for the most part because I don’t get a chance to personally talk to prospects, but Arden Key and Aldon Smith are very similar talents who both happen to have character concerns. While Smith is smoother and more gifted as a pass-rusher, Key might be stronger, and both use their great length to their advantage.

Lorenzo Carter is one of my fastest risers so far in the pre-draft process, and he reminds me a lot of Jason Taylor. Both are rangy, six-foot-six athletes that can close the gap on a quarterback or ball-carrier in an instant with excellent closing speed.

A lot of draft analysts have been enamored with Davenport, but he’s far from a finished product coming out of small-school UTSA. Ezekiel Ansah was the same way coming out of BYU, and the two were often compared during the Senior Bowl last week. I think Ansah is better with his hand in the dirt than the soon-to-be rookie, but Davenport should be capable of rushing from anywhere at the next level.

Some people had concerns about Cliff Avril’s ability to be a pass-rusher in the NFL, but he has clearly proven them wrong with 74.0 career sacks, including six seasons with at least eight sacks. I think Holland is similarly being overlooked as a talented, relentless pursuer that will get after the quarterback and track down runners.

Landry is a tough comparison because he is coming off a down 2017 season, but he’s not a top-end athlete and doesn’t have elite size. However, he has enough athleticism to make plays, and adding strength could help him become a very productive player like LaMarr Woodley was early in his career.

Neither Sam Hubbard or Chris Long has a standout trait when it comes to their natural talent, but both guys give maximum effort and use their length to keep offensive linemen from getting inside on them. I think Hubbard will make a team happy as a rotational piece that could develop into a solid starter.