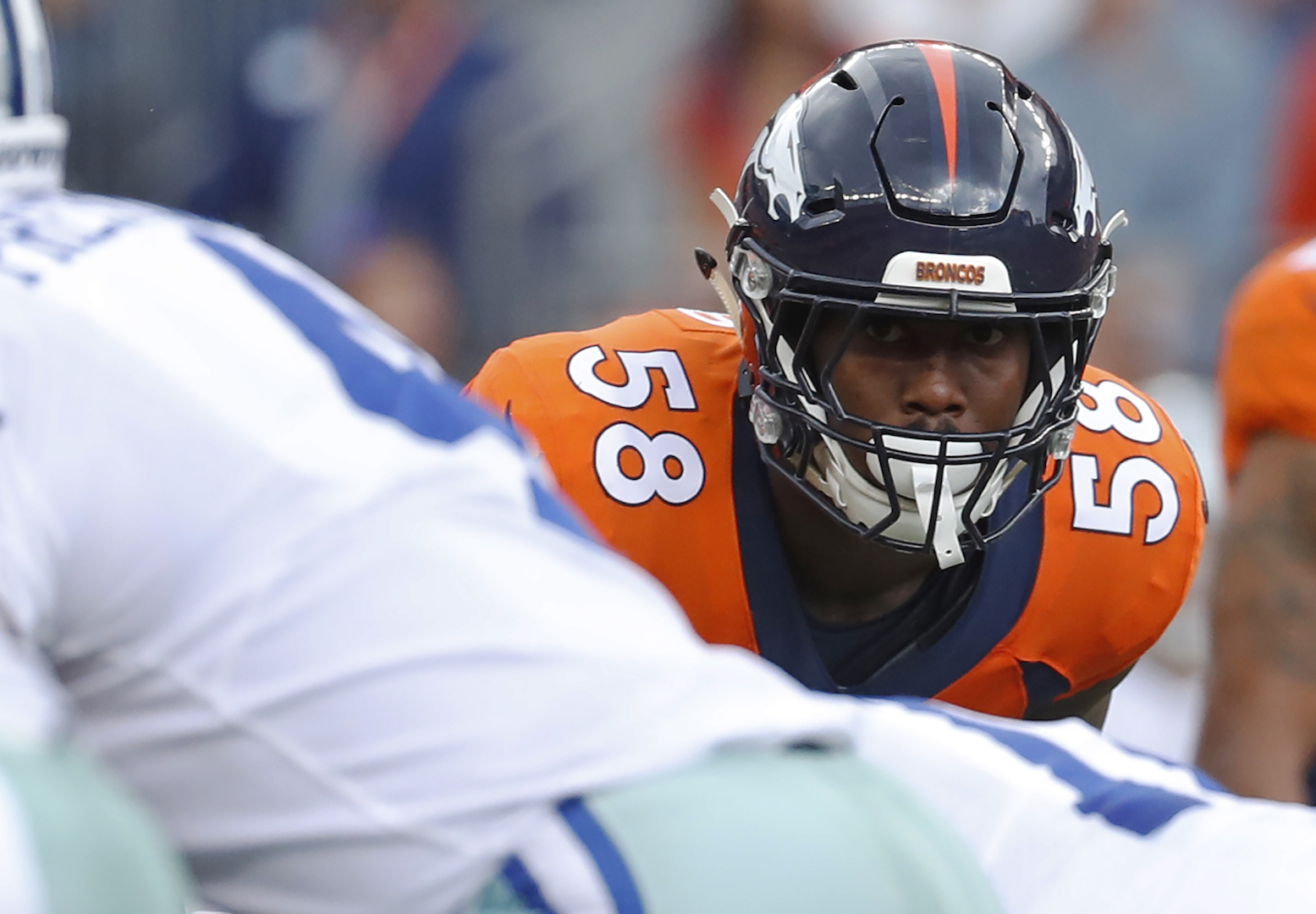 
The countdown of the top players at each position in the NFL continues with edge players. As always, there are a ton of amazing players that are not on the list and easily could have been—especially because we grouped together 4-3 defensive ends and 3-4 outside linebackers into “edge” players—so this group is absolutely stacked. Here are the countdowns of our other top players at each position to this point:

Cameron Jordan, Leonard Floyd (who has tremendous potential entering his third season), Brandon Graham, and teammate Everson Griffen were among those that easily could have been on the list, but Danielle Hunter takes the final spot. The Vikings gave Hunter a huge five-year, $72 million contract earlier this summer, rewarding him for what he’s done (25.5 sacks through three NFL seasons) while anticipating what he will do moving forward. Despite entering his fourth NFL season, Hunter is only 23 years old (24 in late October) and has astronomical potential.

After a slow start to his career, Melvin Ingram III has become one of the league’s best edge players entering 2018. Ingram has 29.0 sacks the last three seasons, and he also plays great run defense to help anchor the Chargers defense. The former first-round pick from South Carolina has a blend of speed and power that makes him difficult for tackles to keep off the quarterback. Ingram had a 5.5-sack month to start last season, and he’ll look to do more damage if the Chargers can get ahead on the scoreboard more in 2018.

An ankle injury forced Myles Garrett to miss the first four games of his NFL career, but he immediately became a force when he entered the lineup as a rookie, racking up 7.0 sacks in 11 games. The No. 1 pick in last year’s draft is simply a beast, with extraordinary acceleration for a player of his size, along with the strength to bully offensive linemen. As deep as the edge group is, Garrett should easily be among the league’s best this season.

Calais Campbell has always been one of the league’s best defensive linemen for Arizona, but he exploded for a huge season in his first for Jacksonville, finishing second to Aaron Donald in Defensive Player of the Year voting. Campbell remained a terror against the run, but he reached double-digit sacks for the first time, with 14.5, last season. Campbell is the only player over 30 years old on the list, but he’s not going to take a big step back on a talented Jaguars team.

Last season, Chandler Jones set a Cardinals franchise record and led the league with 17.0 sacks. The former Patriot has at least six sacks in each of his six NFL seasons, including at least 11.0 in each of his last three seasons and 64.0 for his career. The switch to Steve Wilks’ 4-3 defensive scheme shouldn’t impact Jones’ play much, as he’ll be solid against the run and he’ll get after the quarterback with the best of them.

Injuries were a big reason why, but Jadeveon Clowney hasn’t quite played like a top-tier gamewrecker that is among the league-leaders in sacks through four NFL seasons; however, he’s proven to be a versatile player that does what the Texans ask of him on defense. Clowney is getting better by the year, which is what you want to see from any player. While he hasn’t hit double-digit sacks in a season yet, Clowney is one of the NFL’s best against the run. Entering a contract year, the 25-year-old might put everything together and emerge as a Defensive Player of the Year candidate.

Playing in Kansas City (as opposed to a bigger market that gets hyped) and dealing with some injuries the last few years, Justin Houston is one of the NFL’s most underappreciated stars. Houston recorded 9.5 sacks last season, and he should be even better in 2018 another year removed from his 2015 knee injury. With a plethora of pass rush moves and consistent top-notch effort, when Houston is healthy and at his best, he’s arguably as good as any edge defender in football.

Considered by many the top overall player in the 2016 NFL Draft, Joey Bosa stepped into the league as a premier edge player with excellent size, athleticism, and skill. Bosa gets to the backfield a variety of ways as both a pass rusher and a run defender, and his floor might be 10.0 sacks per season—which he’s hit in each of his first two seasons. With another year under his belt, Bosa could become a 15-20-sack guy in 2018. It would not be a surprise if he’s considered the league’s best edge player several months from now.

With the season quickly approaching, Khalil Mack remains away from the Raiders as he looks for a long-term contract. No end appears to be in sight, but Mack will be one of the best players on the field every week whenever he returns. The former No. 5 pick could probably play any off-ball linebacker spot at a high level, too, but he is dominant as an edge rusher that terrorizes the quarterback and can also blow up opposing running games. Like Bosa, Mack’s floor is probably 10.0 sacks, but the best could be yet to come for the 27-year-old.

Von Miller’s best might have come in Super Bowl 50, when he won Super Bowl MVP and helped lead the Broncos to their first Super Bowl victory since John Elway quarterbacked the team, but he still plays as well as any edge defender in the NFL. Miller has explosive athleticism, but he’s also extremely crafty, allowing him to get to the quarterback in a number of ways; and his craftiness also helps him get into the backfield to stop the run. The three-time First Team All-Pro also not only sacks the quarterback, but he forces the ball out (22 forced fumbles in his career) to drastically change the outcome of games.