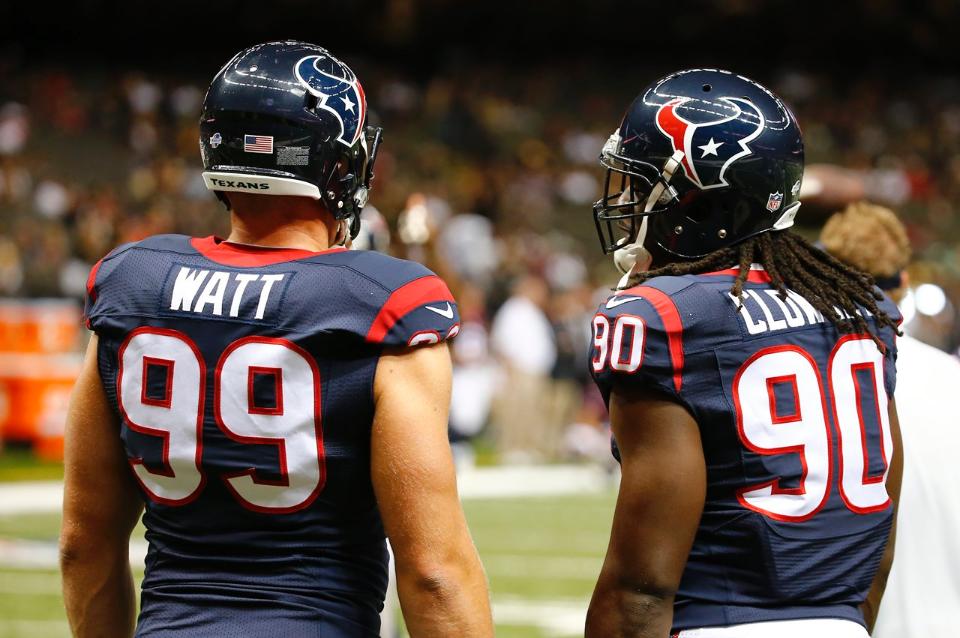 
After rankings and Top Ten Tuesdays on the offensive side of the ball for quarterbacks, running backs, receivers, tight ends, and offensive linemen, now we move defense. We’re starting with interior defensive linemen, sticking with 3-4 linemen and 4-3 defensive tackles. Of course, there are a lot of awesome players in the league, but we attempted to rank the top ten.

The three-time NFL Defensive Player of the Year played in only three games last season after a back injury forced him to IR, but there is little doubt J.J. Watt will return to his dominant form this season. Watt obviously impacts the game with his great run defense and ability to knock the ball down at the line of scrimmage, but just look at his sack totals over his last four full seasons: 20.5, 10.5, 20.5, 17.5.

Aaron Donald has been performing at a high level for the Rams since entering the league in 2014. He won Defensive Rookie of the Year in 2014 and was named First Team All-Pro in his next two seasons. He has 9.0, 11.0, and 8.0 sacks in his first three seasons, while playing in all 48 games. Donald is as disruptive as anyone in the middle, and it’s scary to think his current performance might be his floor each season.

With J.J. Watt out for most of last season, Jadeveon Clowney stepped up in a big way for the Texans, helping keep them near the top of the NFL while switching from outside linebacker to defensive end. The former number one overall pick built on his step forward from 2015 and continued his ascension last season. Clowney was great in run defense, showed great effort, and clearly has excellent pass rush skills, but he should get even better this season. His upside is through the roof.

When Ndamukong Suh is on his game, he’s as dominant as almost any player in the NFL. He can single-handedly destroy games for opposing offenses, with the ability to blow up the run game and send offenses backwards. Suh has 61 and 72 tackles in his two seasons with the Dolphins, and his presence helps free things up for the rest of the defense.

After receiving a big $100 million extension last season, Fletcher Cox remained a consistent player for the Eagles. While he put up more tackles and sacks in the two-gap system he played in during the 2015 season, Cox was still a force last season and received a lot of attention from other teams. Losing running mate in the middle Bennie Logan, who signed with the Chiefs in free agency, might make things tougher for Cox, but he should still keep up his production.

Atkins seems to have regained his full strength and health over these last two seasons, racking up 11.0 and 9.0 sacks. The Bengals took a step back last season, but their star defensive tackle is still in the discussion of best 4-3 defensive tackle in the NFL. He’s arguably the best pass rusher in the league from that position.

Despite battling some injuries, Gerald McCoy has been one of the most consistent players in the NFL over the past several seasons. He’s the anchor of Tampa Bay’s defense, playing well both against the run and rushing the passer. The addition of former Redskin Chris Baker should help make things easier for McCoy and could free him up for bigger numbers.

Don’t let the state of the Jets distract you from how good Leonard Williams is. New York made an excellent pick selecting Williams sixth overall in the 2015 draft when he fell in their lap. The former USC Trojan just turned 23 today, and he should keep getting better after he went from 3.0 to 7.0 sacks in his first and second seasons.

Going from one New York team to the other, Damon Harrison had his best season in his first with the Giants. Harrison led all defensive tackles with 86 tackles and set a career high with 2.5 sacks. He might be the best at eating up space in the NFL, and he was a big reason the Giants became one of the best defenses in the league last season. Harrison is also a great trash talker, and how can you not love his mouthpiece? (Although, he might change the mouthpiece next season because of people copping his style.)

Through six seasons, Wilkerson has 41.0 career sacks—great production as a 3-4 defensive end. The Temple product has two seasons with 10.5+ sacks, and he’s up for debate as the best pass rushing 3-4 defensive end behind J.J. Watt. Wilkerson only had 4.5 sacks this season (lowest since his rookie season), but the Jets were playing from behind more as they struggled throughout the year.