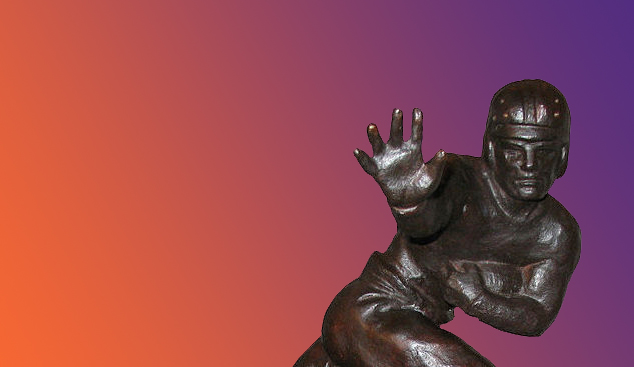 
After starting the 2019 Heisman candidate countdown with four consecutive quarterbacks, it continues with its fourth consecutive running back for Day 8.

Clemson running back Travis Etienne has track-star speed but has become an all-around star player entering his junior season.

Etienne went from a 107-carry home-run threat that averaged 7.2 yards per carry as a true freshman to averaging 8.1 yards per carry on nearly double the carries last season—rushing for 1,658 yards and 24 touchdowns on just 204 attempts. This is almost certainly Clemson’s last season with Etienne before he goes to the NFL, so the workload could certainly increase a bit more, especially after Tavien Feaster transferred to South Carolina. The Tigers will be a dominant team, and Feaster, who can take it to the house in an instant at any time, could be a threat for 2,000 rushing yards and 30 rushing touchdowns. Feaster has the talent to get more involved as a receiver.

Because Clemson has Trevor Lawerence at quarterback, they can open things up and throw the ball 40 times per game if they want to; Etienne might end up with not many more carries than last year. 8.1 yards per carry might be difficult to repeat, even for an exceptional player like Etienne playing behind an experience offensive line.

Etienne is one of the best players in college football, so he basically must remain healthy and get a slight increase in touches while maintaining a mind-boggling yard-per-carry mark and finding the end zone like he has his first two seasons for the Tigers.