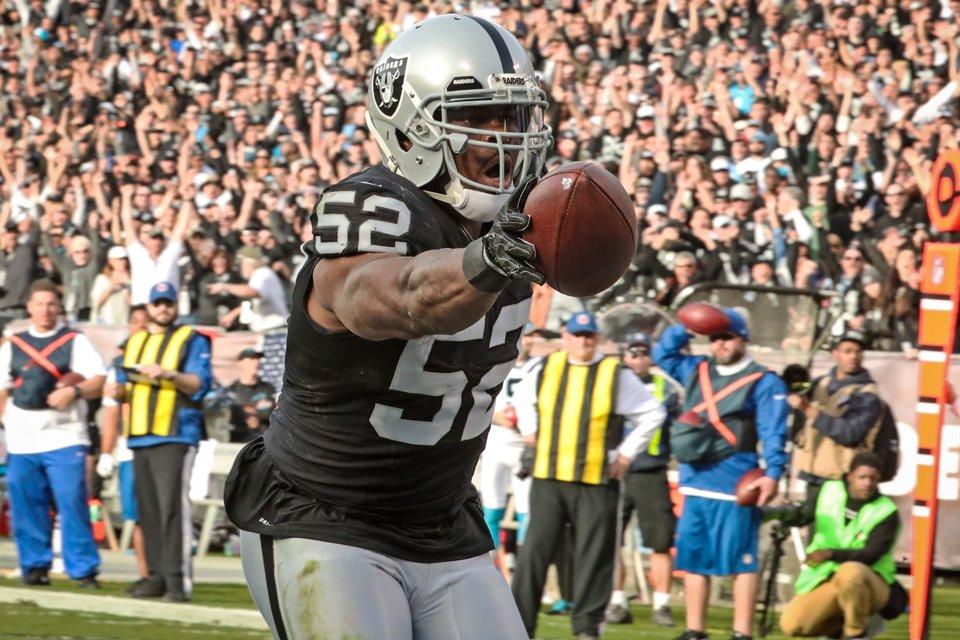 
After starting with interior defensive linemen last Tuesday, we continue with the defensive side of the ball with primary edge players (4-3 defensive ends and 3-4 outside linebackers). You can check out our quarterback, running back, receiver, tight end, and offensive lineman rankings if you missed them.

There are a ton of great players on this list, but the top spot probably comes down to two guys. Von Miller gets the nod, slightly, over Khalil Mack here. The former number two overall pick simply wrecks games for opposing offenses as a versatile player that can do everything at the highest level. He can obviously rush the passer, but he’s also athletic enough to cover running backs down the field. With the Broncos switching to a 4-3 under new head coach Vance Joseph, Miller might get after the passer even more this season.

The reigning Defensive Player of the Year could be the number one guy on another list and you wouldn’t get any argument from us. Mack has 30 sacks over his first three seasons and just keeps getting better. Along with Derek Carr, Mack has led the turnaround for the Raiders as the ripped leader of the defense. Even in a league so stacked on the defensive side of the ball with players like J.J. Watt, Luke Keuchly, and others, it wouldn’t be surprising to see Mack win some more DPOY awards.

A couple years ago, it would have been hard to argue anyone but Justin Houston was the best edge player in the NFL. In 2014, he came just half a sack away from tying Michael Strahan’s single season record of 22.5 sacks. Houston has battled a knee issue at the end of 2014 and the beginning of 2016, which limited him to just 16 games over the last two seasons. Still, Houston’s impact is felt whenever he’s on the field and healthy. Somehow, Houston is only 28-years-old and has a lot of good football ahead of him.

After unfairly being criticized by some as a bust after only one season, Vic Beasley had a huge 2016, leading the NFL in sacks with 15.5. He was a big reason the Falcons defense was as potent as they were during their awesome season. Beasley, who put on a show during the 2015 NFL Combine, is one of the most athletic edge players in the NFL and shows his athleticism on the field. With so much ability, Beasley could get even better as he gets more experience and progresses in the league.

While things didn’t start off too great for Bosa’s NFL career, with his hold out and subsequent hamstring injury, the former Ohio State Buckeye did some damage when he hit the field as a rookie. In just 12 games, Bosa had 10.5 sacks, showing why the Chargers selected him with the third overall pick in the draft. He could be categorized as an interior player, but he’d be among the elite on that list too. Bosa looks like he’ll be a cornerstone of the Chargers franchise for many years.

It could not have been fun getting traded from the Patriots, but Chandler Jones took it in stride and had another great season. Jones had 11.0 sacks during his first year in the desert, and he was rewarded with a big five-year contract extension. The sixth-year veteran has 47.0 sacks through his first five seasons, and he could still be entering his prime.

Like Chandler Jones, Melvin Ingram got paid this offseason after getting franchise tagged by his team. Ingram’s is a four-year, $66 million deal, with over $40 million guaranteed. The Chargers wouldn’t hand out that type of cash to Ingram if he didn’t earn it. After a relatively slow start to his career, Ingram has been one of the best edge players in the NFL against both the run and pass. He and Joey Bosa will continue to make things very difficult for opposing defenses.

This might be the least-known name on the list, but Danielle Hunter has been a force for the Vikings during his first two seasons. Hunter was drafted out of LSU in the third-round of the 2015 NFL Draft, and he immediately stepped up with 6.0 sacks in his rookie season. Last season, the 6’6” Hunter recorded 12.5 sacks as a terror off the edge for offensive tackles. Playing on the talented Vikings defense, Hunter will look to keep emerging as one of the better defensive players in the NFL.

Bennett only played in 11 games and was limited to 5.0 sacks this season, but he’s still one of the best defensive players in the NFL. He seems to be very popular among the players, who praise him as a power for Seattle’s defense. Bennett doesn’t have over 10.0 sacks in any of his eight seasons, but he is one of the strongest edge players in the league against the run.

Brandon Graham is another player that’s very stout against the run. The eight-year Eagle is a strong, stocky player with shorter arms, but he uses his strength to be a solid pass rusher. He needs to improve on his sack totals (he doesn’t have more than 6.5 in a season), but Graham had the second-most pressures in the NFL last season, according to Pro Football Focus.