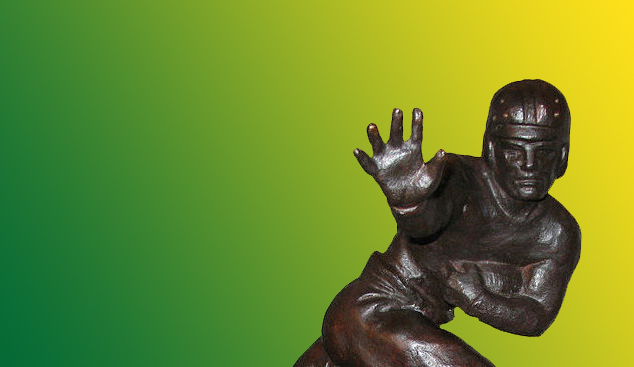 
The second week of the 2019 Heisman Trophy countdown concludes with a senior quarterback. Here are the first nine days of the countdown:

Oregon’s Justin Herbert could have entered the 2019 NFL Draft and likely would have been a high selection, but the six-foot-five quarterback returned to his hometown college program for one final season.

Herbert is entering his fourth season as the starting quarterback for the Ducks, so he has plenty of experience with over 7,000 passing yards and 63 passing touchdowns in his career. The Pac-12 should be wide-open after more senior quarterbacks from last year left for the NFL. Herbert is entering his third season in Mario Cristobal’s offense, so he should have full command and comfort running the show, and he’s shown he can put a team on his shoulders. The senior quarterback can make a Heisman statement in Oregon’s season opener against Auburn at AT&T Stadium before playing four of the next five games at home.

Defeating Auburn to open the year will be a tough task for the Ducks, and Herbert’s performance in that game will be key for his Heisman candidacy—there are not any other noteworthy out-of-conference games for Oregon this season. The bar is high for Herbert after former Oregon quarterback Marcus Mariota’s Heisman season a few years ago. Durability has previously been an issue in the past for Herbert.

Herbert likely needs at least a big individual performance in the first game against Auburn, and he must put up huge numbers with the Ducks losing only one or two games and winning the Pac-12.