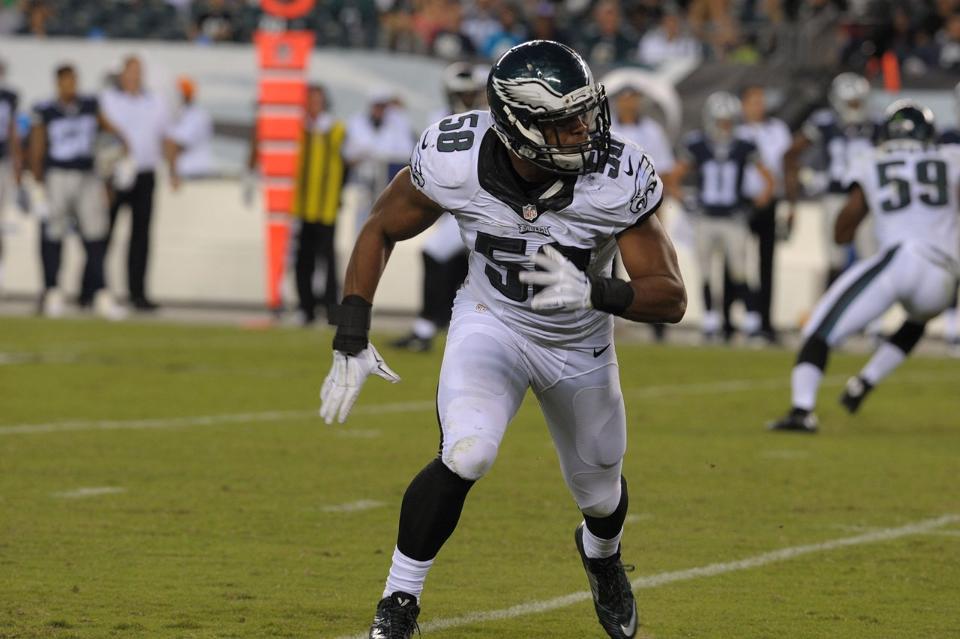 
For this Fourth of July edition of Top Ten Tuesday, we’re going through the top linebackers in the NFL. Primary edge players aren’t included, as they were in last week’s Top Ten Tuesday. Quarterbacks, running backs, receivers, tight ends, offensive linemen, and interior defensive linemen rankings can also be viewed. As always, there are a lot of great players left off the list, and these rankings can certainly be different than what we have.

There simply isn’t a bigger difference-maker at the linebacker position than the Panthers’ leader on defense. Luke Kuechly is a four-time All-Pro (three-time First Team) and is the only player on the list with both a Defensive Player of the Year and Defensive Rookie of the Year award. He just turned 26 and should remain among the elite defensive players in the league for a long time. The only concern with Kuechly are his concussion issues over the past two years; hopefully he can remain healthy and continue to be a joy to watch on the field.

People in Seattle will probably say Wagner is even better than Kuechly and the argument can be made. Last season, Wagner led the NFL with 167 tackles, including 4.5 sacks, while being named First Team All-Pro for the second time (he was also named Second Team All-Pro once). Like Kuechly, Wagner does it all and is one of the elite defensive players in the NFL.

Through two seasons, Jordan Hicks has shown he is one of the best defensive playmakers in the league. Playing in the middle of the Eagles’ defense, Hicks has seven interceptions in 24 games and is clearly one of the best—if not the best—linebackers in coverage in the league, while he’s also a very good blitzer and run-stopper. The biggest concern with Hicks is his health, and it’s the reason he dropped to the third-round in 2015; but that can be said for almost everyone in the NFL, and it wouldn’t be surprising if Hicks stayed healthy throughout the rest of his career.

Everyone remembers Dont’a Hightower’s huge game-changing play in Super Bowl LI, and he makes those types of big-impact plays for the Patriots throughout the year. Hightower is solid at everything, and the Patriots re-signed him to a four-year deal this offseason for a reason. He can play any of the linebacker spots for New England, and he might be the best run-stopping linebacker in the NFL. Hightower is very reliable and someone the Patriots can count on to do their job.

Luke Kuechly’s running mate in the middle is 34-years-old but still gets it done for the Panthers. Like Hicks, Davis has seven interceptions over the last two seasons (while playing all 32 games). The veteran linebacker flies sideline to sideline and makes things difficult for offenses trying to move the ball, whether it’s on the ground or through the air.

Unfortunately, NaVorro Bowman has battled injuries throughout his career. He’s currently recovering from an Achilles injury, which keeps him lower on the list. But Bowman is a four-time All-Pro and is still only 29-years-old. If he stays healthy and keeps performing as he always does, Bowman will have a very strong case for the Hall of Fame.

Like most of the players on this list, C.J. Mosley is a versatile linebacker that does it all for his team. The former Alabama stud continues to be a very good run defender, but in 2016 he recorded four interceptions. Leading one of the stingiest defenses in the NFL, Mosley should continue to be considered one of the best.

The moment he entered the league in 2012, the Buccaneers got a great player in Lavonte David. Through five season, David has 664 tackles and has only missed two games. He also has 18.0 sacks and ten interceptions in those five years. If the Bucs are to take a step forward this season, David will be right in the middle of it on defense.

The Falcons took a made major strides on defense in 2016 on their way to a Super Bowl appearance, and the rookie Deion Jones was a big part of that. The second-round pick from LSU had 108 tackles, three interceptions, and two touchdowns, while bringing a real intimidation factor to the defense. Heading into his second season, Jones will try to help Atlanta’s defense become one of the top units in the NFL.

A March 2016 trade was a key reason for the Dolphins’ turnaround and playoff appearance last season. Miami snatched Kiko Alonso and Byron Maxwell from the Eagles in exchange for moving back from eighth to 13th overall in the 2016 draft. Alonso, who missed 2014 with a knee injury and battled through the knee in 2015, returned to form in 2016. He was one of the best players on the field each week, and should continue to as an athletic, do-it-all linebacker for the Dolphins.